We chat to Ryan Welch, soon to be our new National Account Manager, about his career so far at Agon Systems, why he loves working here and how the season’s going for Peacehaven FC. 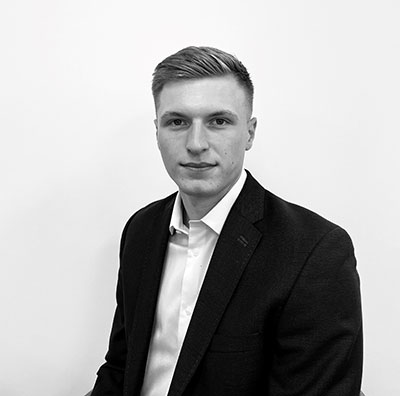 When did you start working at Agon Systems?

I started working part-time in the warehouse in my school holidays – my Dad [CEO Sean Welch] was keen for me to start working and really earn my pocket money. My first jobs were sorting tags and processing orders.

What did you do when you left school?

I joined Agon Systems as part of the warehouse team in 2018. It was my responsibility to accurately pick and pack products to be sent to our customers around the world.

Alongside this, I worked as a football coach. Looking after up to thirty eight-year-olds was quite a challenge! It taught me a lot – how to deal with people (parents as well as the children) and the importance of safeguarding when you’re working with young people.

Unfortunately, when the covid pandemic hit the football coaching work disappeared, so I focused on my role at Agon Systems. I moved up to a Warranty Repair Technician role, which gave me a really good understanding of how our security devices work. I was then promoted to Tag Recycling Manager, giving me my first experience of a management role.

Did you work throughout the covid pandemic?

Yes, I was in the warehouse pretty much every day. We had to furlough a lot of the team so those who remained had to work hard to keep the orders going out the door to our clients.

Did you enjoy working in the warehouse?

Yes, I had a great time working there. It was a big challenge when you have a ton of orders to fulfil and only a day to do it, but it’s really satisfying because when it’s done it’s done, and you know you’ve kept your customers happy.

When did you move out of the warehouse?

How are you finding the role?

I really enjoy it. It’s a big responsibility, but a good challenge to have. I particularly like the opportunities to go out and meet new people, and the travel is fun too.

Where have you been to so far?

I’ve been looking after the SuperDry account, which has taken me all over the UK – Edinburgh, London, Nottingham, Manchester… I’ve also been further afield in Europe.

In my new National Account Manager role I’m going to be looking after Finish Line, so I’ll be heading out to Indianapolis this year to visit them, and on the way going to Canada to see the new JD Sports stores which have opened there.

What are the biggest challenges in your role?

I’ve had to learn a lot about managing my time, to make sure I can be there for every client who needs me.

Making sure we have enough stock in the warehouse is another challenge. It’s important that we keep the gap between order and delivery as small as possible, and it can get really tricky juggling stock around multiple new store openings. But it’s really satisfying when you get it right.

Is it easy to work with the Concept Tag?

Yes, every customer we go to see has around a 50% loss reduction once they’ve introduced the Concept Tag, and get a return on the investment in 12 to 15 months, so I see lots of happy people!

One of the best results we’ve had recently has been in partnership with Checkpoint in Australia. They introduced the Concept Tag as a trial in Big W stores. The results were so good that Big W cancelled the trial two months early so they could go straight to a full roll out.

We also see a knock-on effect that when we put Concept Tag into a store, the stores around them [without Concept Tag] see an increase in thefts. This happened with SuperDry in Liverpool – their thefts dropped and everyone around them increased.

My only problem is that sometimes people just don’t believe the results, they think they’ve been manipulated because they sound too good to be true.

Outside of work, do you still get to play football?

Yes, though sometimes not as much as I’d like because of all the travel. I play non-league for Peacehaven FC.

We were playing really well at the start of the season but then we had a run of losses, which messed up the season.

We’re not going to get relegated, but a mid-table finish isn’t much fun.

What do you think the future holds for you?